There is a failure of Justice in the State of Pennsylvania.
"Justice for All" should read "Justice for the rich and powerful."

On December 9, 2004 I underwent right knee replacement surgery. As part of my rehabilitation I needed to go to physical therapy. I originally started my therapy at First Choice in Newport. However, by late January of 2005 I decided to switch to the Hetrick Center in Mechanicsburg because they have a pool with a treadmill to promote greater range of motion.

I went to my doctor at Broad Street Family Heath Center in Marysville Pa. for treatment for these burns.

Doctor Matsco gave me 8 days worth of oral antibiotics. I have diabetes and am very worried about infection or gangrene.

The wound looked bad to me.

I went back to the doctor’s office and saw the nurse. They gave me 3 more days of oral antibiotics.

I was still and am very worried about infection or gangrene and it did not look good to me so I visited the doctor again today. They started me on antibiotics again. They gave me a 10-day supply this time. They told me to come back on Thursday. At this point the lessor burns are almost healed.

I went back to the doctor’s office again. He said the wound may debridement the wound but that would require a surgeon. He gave me a prescription for Granulex and told me to come back in 2 weeks. This is getting to be a long hard thing. I never had such a bad burn before. The drug store has to order the Granulex so I didn’t start it today.

I started feeling some pain this morning. This was mainly occasional sharp quick pains like the sticking of a needle.

I started using Granulex this evening. This picture is the last one before starting Granulex.

I think Granulex is a spray for debridement. If this doesn’t work it will require a surgeon.

Freshly sprayed with Granulex. Later in the day.

It has been one month and four days since the burn. It is still very bad. On March 13, 2005 I will need to take a long trip down south. I guess I will need to find a doctor down there to continue treatment.

I went to Broad Street Family Heath Center for the fifth time for this burn today. Doctor Matsco sent me to Susquehanna Surgeons. Doctor Page examined the burn and said it was a fourth degree or very severe third degree burn. I think it burned to the bone. He scraped it and gave me a prescription for Panafil ointment. This caused pain, which is continuing tonight. He said it would be a long time before this heals. He says I will need to see a doctor in two weeks in North Carolina. Doctor Page said a bad burn like this would take three to five months to heal.

It is still sore today.

This wound continues to be sore and does not seem to heal. I seem to be developing some kind of wound below it above my ankle.

There is no improvement. There is a widening red area around the wound. I hope it is not infection.

I called Doctor Matsco’s office and they called in a prescription for Amoxicillin. This is more expensive than the previous antibiotics. It came with a $91.00 price tag. It is a 10 day supply.

Today I was examined by Doctor Gibble at Atlantic Internal Care. He did blood work and told me to continue current treatment and come back in two weeks.

This continues to be a very bad burn as it approaches the 2 month mark.

I think it might be beginning to heal now. It has been slow because it was so deep. It may have burned the bone. It will still be a long time before it heals. The doctor bills are building up. I guess the Hetrick center needs to do something, but they have offered nothing so far. It has been a long time since this happened. I may have to see an attorney.

The Hetrick Center has not yet contacted me.

you by the end of next week if that is convenient for you. If you would

like us to telephone you, please e-mail me your phone number otherwise

we will communicate with e-mail. Thank you for contacting us.

The burn seems to be almost healed now.

The Hetrick Center has still not contacted me. I saw Doctor Gibble again today.

He says the burn is just about healed and I don’t have to come back anymore for it.

I am using antibiotic ointment on it now and can probably stop that in a few days. It doesn’t give me any pain anymore.

The Hetrick Center has still not contacted me. The wound is itching now. I guess that is a good sign it is really healing.

The pain is almost gone now. There is just an occasional twinge of pain now.

I think it is as healed as it will ever be. Maybe the bone has been burned.

Hetrick Center to settle on this but they don’t seem to be willing to do so.

The Hetrick Center now refuses to answer my email.

The Hetrick Center continues to refuse to answer my email.

I think the only solution will be to go to court.

The Hetrick Center still will not pay anything.

The wound still bothers me some after all these months, mostly itching.

September 28, 2005
I realized they would never give me anything and filed a claim in small claims court.

Doctor Hetrick called me today. He said his attorney said my case was frivolous.

I consider three months of pain and suffering due to severe burns anything but frivolous.

He should have severe burns himself then maybe he would understand the truth.

I just received a threatening letter from The Hetrick Center’s law firm(Charles I. Artz & Associates).

Charles I. Artz tells me to withdraw my case immediately or he will punish me.

If people are not allowed to collect anything for injuries done to them, then there is something seriously wrong with this country. This threat is very upsetting to me.

If my case is so small it would cost more for an attorney than I could receive in compensation that is exactly what Charles I. Artz is telling me.

It seems they are telling me "We made the mistake but the jokes on you!!!". I am sure they get great pleasure stepping on people with less money and power than they have.

They say I need an expert witness.

This case is so uncomplicated anyone can understand it. The electric simulation consists of placing 4 pads with electrodes around the knee and turning on the electricity for about 15 minutes. When they were removed there was a burn under each one of them. The electricity was turned up too high.

I think anyone could understand that!

Here is some information I found out about that.

We made a request to Diane at Mechanicsburg Hetrick Center to have my records sent to us.

We received an authorization for release of information form on. On the back of this form was hand written amounts the Hetrick center would charge to research file and pull records, $17.48. There was also a note on bottom stating to call Claire to get the cost of copying the files.

We called to speak to Claire. We were told she was not in and would call back.

Received call from Claire at Hetrick Center in Middletown regarding cost to copy James Crownover’s files. She stated that the cost would be $84.18 to copy 87 pages, plus the $17.48 and postage to mail. I asked what dates were referenced. I stated I only needed the period starting in February through March of 2005. Claire stated that Gordon Ellis had the records and was not in the office this morning.

This charge does not seem reasonable.

February 16, 2006
We went to small claims court today. The Hetrick Center agrees they caused the burns but say they are not responsible. Their attorney had all kinds of legal gimmicks that supposedly meant they had no legal responsibility. I guess they are saying, we burned you physically, we burned you financially, we burned you mentally and the jokes all on you. Ha Ha Ha. We won't hear the final decision for about a week but money and power always wins over truth and justice so I assume we will loose this case. What has this country degenerated to?

We just got the decision today. Everyone agrees I was burned at the Hetrick Center. Due to lawyers and legal technicalities the Hetrick Center is not responsible! Truth, Justice, and the American Way is pure fantasy. All that matters is who has the money and power to defeat the peasants! The people lose in this county. I had no attorney. I could not afford one. If I had won the case with an attorney and medical expert the settlement would have been much less than the cost. 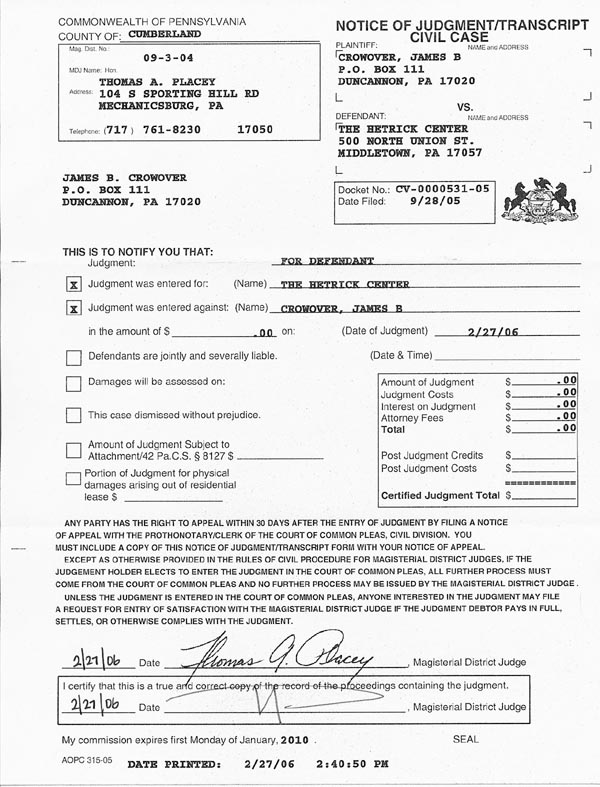 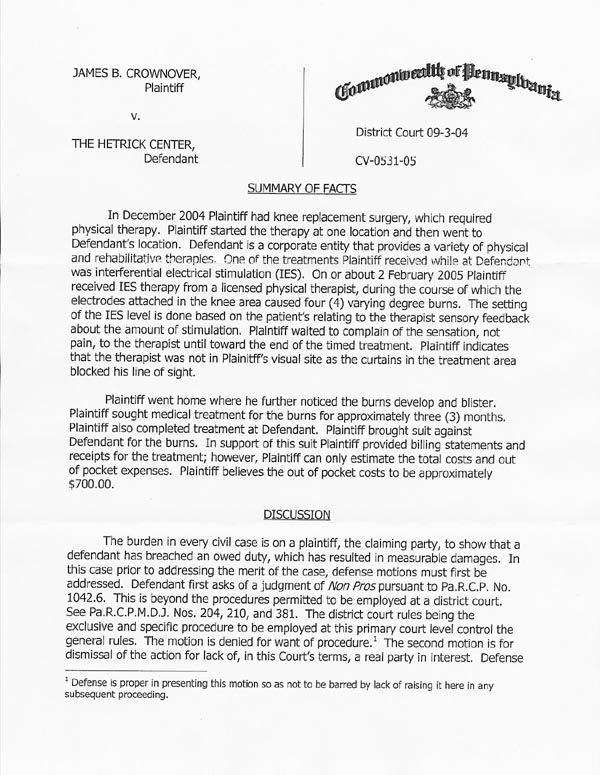 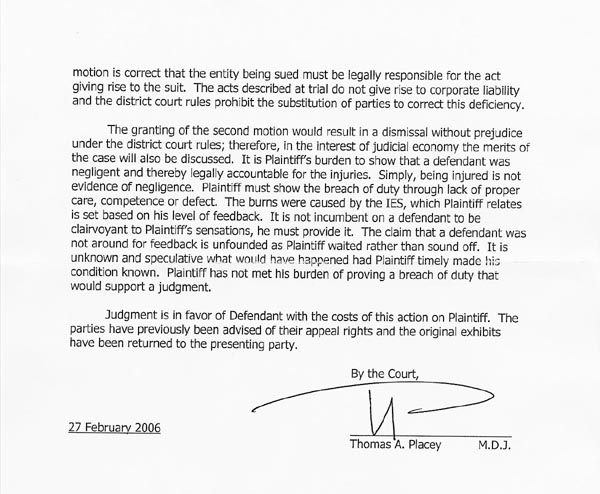 The Hetrick Center is not responsible for it's actions. I consider this to be malpractice!